The ultimate "How Come?"

In 1995, my father started writing weekly on a site he called "How Come?". It's what I like to think of as (optimistically) one of the first blogs. Even back then, I remember thinking how cool he was for that.

It struck me recently, that if he were still writing "How Come?", he'd have certainly written about slithering Bernie Madoff. In fact, he'd have a whole series on that... and for different reasons than the simple, raw disgust the whole story raises. No, it would be for a much more personal reason than that. 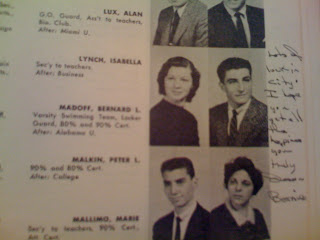 It would be driven by the kind of shivery feeling you only see in movies when the main character looks a murderer in the eye. It would be motivated by the same sort of nausea you get when you see tapes of September 11th. It would be about how he had such proximity to this seemingly normal Far Rockaway High School kid, and member of his swim team, who turned out to be so evil that it's practically impossible to accept. It would have sickened my dad deeply to know that he probably treated someone so evil with the natural respect and friendliness he treated everyone he knew. And it would have sickened him even more perhaps to re-read the words written in his high-school yearbook by someone who would prove to be so inconceivably unethical and bad. It gives some measure of relief to know that this criminal never became anything more than a High School acquaintance in the following 51 years... but so unfortunate that others who knew him back then probably became his victims.

On this day, when loathsome Madoff is imprisoned for the rest of his life - and the life of anyone who ever knew him - if my dad were here to write his blog post, he would have certainly quoted one if his favorite albums:

"In all my years of judging, I have never heard before of someone more deserving the full penalty of the law" - Pink Floyd, The Wall.

...and he, of course, would have ended the whole story of this horrible deception with:

Email ThisBlogThis!Share to TwitterShare to FacebookShare to Pinterest
Labels: stories

Maybe simple product names aren't all they're cracked up to be

Given the confidence I have in my spam filter, I read my emails in order (or reverse order) using the nifty "open bracket" shortcut in Gmail ("[" = archive and go to previous)... so when a cold-call email comes in, it means I somehow have a connection to the sending company or sender - so I read it.
Today I got one that I had to stare at and read about 4 times before I realized I didn't care about it - which was exactly the opposite of the goal the sender presumably had.

Subject: "Role of Managers in enabling Architecture Center of Excellence(COE) for Business Differentiator"

Huh?
This was the title of a training webinar (I figured out after looking a few times)... Was it the goal of the organizers to create such a complex name that I would feel inadequate about not understanding it and attend the webinar just to be sure I wasn't missing something important? Am I missing a new marketing trend here which says that super-nasty names get twice the attention as simple ones?

uh... yeah - I guess they are right... I never would have blogged about a training class named "Managing Architecture Projects"... (but I might have attended)
Posted by JR at 4:49 PM No comments: