Pity the marketers - or envy them... 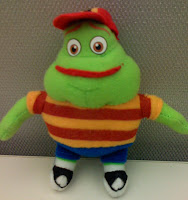 You like this little critter pictured here?
I don't... but that's only because I know that he's a dressed up, smirking, wise-ass peice of snot (literally). When I found him under the drivers seat of the mini-van, I recognized him from his commercials (but, no, I could not name the product, until I turned him around to find the product name happily advertised on his eensy weensy, tightly-fitting, booger-soaked sport shirt)...
I asked my wife very skeptically "How'd he get here?"
Turns out, she was surveyed upon exiting the local drugstore about her knowledge of "Mucinex" - the drug which little-snot-man represents... Luckily, she knew nothing of it.... but as a "gift" for her troubles, the marketing rep doing the survey gave her "Mr. Mucus" (his actual name). Actually, the rep handed him to our 15-month old in her carriage - and I can just imagine what my little baby was thinking ("AHH!! get it of me! get it off me!).

Anyway... I was sure this would be a post about how some marketers are so clueless about what sells, and how I pity the poor souls who are tasked with inventing campaigns for products which are associated with unfortunate bodily fluids - but now, I'm not so sure. A couple of days ago, I read the "Hits and Misses " column in the June issue of Business 2.0 - and sporty little mucus man was pictured and marked as a HIT!

Mucinex has soared like loosened phlegm to the No. 2 spot in the cold-medicine market. The success is largely due to memorably gross advertising that personifies congestion as "Mr. Mucus,"

If you read that whole column, it's not clear that the marketing genius who thought up the scheme of dressing up a blob of mucus, and naming him, is responsible at all for the success of Mucinex - but the drug is successful.... so the campaign certainly didn't turn off people as much as it did me...
I wish I could get Seth Godin (marketing master) to give his opinion on this one.
Posted by JR at 9:44 PM

Thanks for HTML tip JR. I added you to my top links, hope that's okay.